Posted on 8 Ιανουαρίου 2013 by kdcl — Σχολιάστε

Nothing is more important than mastering one’s death. Meditations on Amitabha, the red Buddha of Limitless Light, allow us to transform this process into self-liberating bliss and wisdom. These meditations are thus an immensely valuable gift given to us by enlightened beings.

Especially before meditation courses on Phowa (Conscious Dying), one should focus on practices invoking Buddha Amitabha’s energy field. But even shorter forms of practices, like the recitation of 100.000 repetitions of his short mantra are very beneficial in order to create a reliable state of mind while sowing positive tendencies within our sub-conscience.

Buddha Amitabha (Tib. Oepagme) is the Red Buddha connected with the western paradise or the Pure Land of Sukhavati (Tib. Dewachen). His name means “Buddha of Immeasurable Light” and many times he is referred to as the “Buddha of Immeasurable Life”, when he manifests as the Buddha Amitayus (Tib. Tsepame) – especially in practices related to longevity preventing untimely death, such as included in the Phowa practice.

In the Highest Yoga Tantra class of the Tibetan Vajrayana practices, Amitabha is considered one of the Five Dhyani Buddhas (the other four are Aksobhya, Amoghasiddhi, Ratnasambhava and Vairocana), who is associated with the western direction and the Skandha of the aggregate of distinguishing and the deep awareness abilities within the mind. Amitabha is the main Buddha of the Lotus (Skt. Padma) family and has two main disciples, (just as the Buddha Shakyamuni had two) the Bodhisattvas Vajrapani and Avalokiteshvara (Tib. Chenrezig), to his left and to his right. High Tibetan Lamas such as The Shamarpas and Panchen Lamas are considered to be emanations of the compassion of Buddha Amitabha.

As referred to in the sutras, long time ago, in another realm or world, Amitabha existed as a king. Inspired by the teachings of the Buddha of that time, Lokesvaraja Buddha, who taught him the way to supreme enlightenment, the king renounced his kingdom and became a monk named Dharmakara, which means “Treasury of Dharma”. As a Bodhisattva then, he made forty eight great vows-promises for the benefit of all sentient beings. The Eighteenth Vow, which is the basis of the manifestation of a Pure Land, said the following:

“ When I shall become a Buddha, may any being in the ten directions, who, after having heard my name and having awakened to highest faith and aspiration for a rebirth in my pure realm, even having had this thought only ten times, be destined to be born there, with the exception of those who have committed the five immeasurable sins (Anantarya) and those who have rejected the true Law of Dharma. If not so, then may I not attain perfect enlightenment…”

Since then, the Bodhisattva Dharmakara after five eons* of self-cultivation and rebirths, finally attained the supreme state of enlightenment and then known as the Buddha Amitabha. Because of his tremendous amount of merit as a Buddha, his previously, infinitely compassionate vows manifested. This is how the paradise known as Sukhavati (Dewachen) was created.

What kind of pure realm aspired to create; the conditions under which beings might be born into that world; and what kind of beings they would be when they were reborn there; all these are expressed within the forty-eight vows that he took. Through those promises and since then, suffering beings with even only a medium amount of merit are now easily able to be reborn there, which is not the case if one wishes to be reborn in other pure-realms.

Buddha Amitabha is well known in Tibet, Mongolia and other countries where Buddhism is/was practiced, like in China, Hong Kong, Taiwan, and Japan (known as Amida Buddha) and where many practitioners of the Pure Land Schools of Buddhism can be found.

Additionally to that, in Tibetan Buddhism and in Japanese Vajrayana (Shingon Buddhism), there are a number of famous prayers for taking rebirth in Sukhavati (Dewachen), as well as special devotional mantras one can address to Amitabha. There are also – especially in Tibetan Buddhism – many forms of Amitabha rituals and practices*. It is considered to be extremely meritorious and beneficial to perform the rituals of Amitabha or performing a certain personal practice regularly during one’s lifetime or to even just repeat short prayers and mantras. It is believed that even just by reciting the noble name of Amitabha (Amida) Buddha with devotion before leaving this body, will spontaneously direct the consciousness of the devotee into the pure land after his death.

“ In any case three important qualities must be present in the mind of someone who performs a practice to Amitabha in order to be reborn in the Pure Land of Sukhavati: Sincerity, Faith and Aspiration ”

*Aeons are considered as extremely big periods of time, sometimes expanded millions or billions of years.

*Such practices as Phowa and other Amitabha meditations & rituals belonging to the Vajrayana path require transmission from an authorized trained Rinpoche or Lama of a lineage. 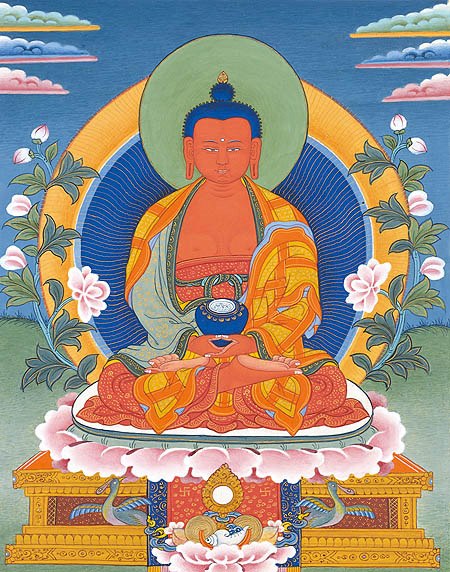 The name of Amitabha, (Tib. Opagme) literally means “Immeasurable Light” or “Limitless Radiance”.  This is because the light-rays from his body are so powerful that they pervade every other Buddha-realm, illuminating them all. He is also known as Buddha Amitayus, (Tib. Tsepame) meaning “Immeasurable Life”, because the extent of his life cannot be calculated.

His body is as red as ruby, which symbolizes the warmth of his compassion extending to all beings. Like the setting sun, his radiant form warms and pacifies the hearts of all who gaze at him.

He has one face which symbolizes that Dharmakaya is free from all conceptual complication. His two arms represent means and wisdom and his two hands in meditation gesture, signify the unification of means and wisdom. He holds a begging-bowl filled with amrita, symbolizing his kindness towards sentient beings by giving vast and deep Dharma teachings. He wears the three dharma-robes, denoting gradual instruction of beings through Shravaka, Pratyekabuddha and Bodhisattva Paths. As he never wavers from resting in the equality of Samsara and Nirvana, his legs are in Vajra-posture.

He also has the 32 principal and 80 secondary marks of a Buddha, like Buddha Shakyamuni. On his head, one of the main marks is the head-mound or “Ushnisha”, gained whilst he was practicing the spiritual path, from bowing down with reverence to the Buddhas. As a result, at the time of attaining Buddhahood, the head-mound appeared.

Amitabha sits on a throne that is supported by 8 peacocks associated with the western direction, and embodies discriminating wisdom, which arises when thoughts of desire and craving are purified. It is believed that birds, in particular, have strong desire and craving, so, as a symbol of craving transformed into discriminating wisdom, Amitabha’s throne is supported by peacocks.

On Amitabha’s throne there is a thousand-petal lotus, which symbolizes that he remains unstained by Samsara. Although he has attained liberation, he has not abandoned his body nor entered Nirvana, but resides in the world, due to his compassion, in order to benefit all beings. His back rests against a Bodhi tree, 600.000 yojanas high (1 yojana is approximately 6,4 kilometres) and its branches, leaves and flowers extend 800 yojanas. Due to our impure vision, we only see a small Bodhi-tree at Bodhgaya, but once we are reborn in Dewachen, we will see a Bodhi tree resembling this one described above. It is called a Bodhi tree because every Buddha has one, and when one achieves Buddha-hood, it is said that one will have a Bodhi-tree to lean against!

To Amitabha’s right is Bodhisattva Chenrezig (Avalokiteshvara), with 4 arms, and to his left Bodhisattva Vajrapani, with 2 arms. The fact that both are standing symbolizes, first, that until Samsara has been emptied they will work to liberate sentient beings, and, secondly, that they are disciples of Buddha Amitabha. They are surrounded by an infinite number of Buddhas, all with head-mounds and wheel-marks on their hands and feet, wearing dharma-robes, as well as Bodhisattvas and Arhats. 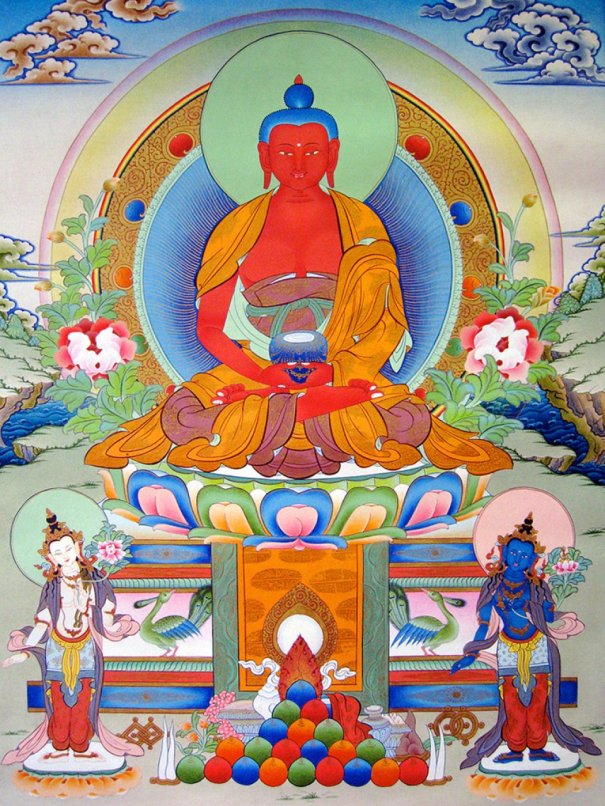 “ In general, to enter a Buddha-realm, one must have removed even the most subtle of obscurations, kept very pure the samayas (tantric commitments), and have attained the first bodhisattva level.  So, for ordinary beings, it is very difficult to enter a Buddha-realm. However, due to Amitabha’s strong wishing-prayers, anyone who makes a sincere wishing-prayer to go to Dewachen can be reborn there, even though one has not purified bad karma nor liberated oneself yet from all the disturbing emotions ”

In this present Superior Eon, the Bodhisattvas Manjushri, Chenrezig, and Vajrapani, as well as deities, nagas and humans, requested Shakyamuni to teach «The Sutra of the Pure Realm of Dewachen». This sutra describes analytically the qualities of Dewachen.

In brief, these qualities are that the earth is made of precious substances, the ground being as flat as the palm of a hand, not uneven like our world of mountains and valleys. It is vast and spacious and the light shining from the body of Amitabha, and from the jewels and precious substances, makes it very clear. The ground is not rough, solid or stony, but soft, smooth and comfortable. If one were to press down on the ground, it would give way and spring back like foam rubber.

In Dewachen, the trees are made of 7 precious gems: all the roots are of gold, the trunks are silver, the branches lapis-lazuli; the large leaves are crystal and the small ones are pyrites; the blossoms are pearls and the fruits are diamonds. Whatever one wishes for appears from these trees. Jewels, tassels and adornments loop from one tree to another. Birds and animals, unlike those of our world, are manifestations of Buddhas and bodhisattvas. Some are the colors of conches, turquoises and corals, and their bird-calls are very enchanting, like the sound of a lute. Within those sounds are taught the vast and deep teachings of the Dharma.

The rivers flow softly and gently, carrying the fragrance of camphor and white and red sandalwood. This water has 8 qualities: its essence is very cool, its taste delicious, its outer appearance light, soft to the touch, very clear and unsullied by stones or pebbles; if drunk, it gives no harm to the throat or stomach. On the water are Buddha-manifestations of geese, ducks and cranes. One can bathe in the many pools, reached by descending flights of 7 steps made of precious stones.

Although these pools are deep, as one enters, the depth of the water adapts itself to the size of one’s body. Surrounding these bathing-pools are fragrant Utpala and lotus blooms, emanating light-rays. At the tips of the light-rays appear innumerable Buddhas, each surrounded by Arhats.

Having taken birth in Dewachen, one does not hear any more even the mere names of the 8 unfavorable states, or of the lower existences. If someone wishes to visit the other pure realms of, for example, Vairochana, Ratnasambhava, Tara or the Glorious Copper-Colored Mountain of Guru Rinpoche, one can simply go there, receive empowerments and teachings from those particular Buddhas and return again to Dewachen.

“ Having been born in Dewachen, one possesses unobscured clairvoyant powers, including the ability to see other beings in their particular worlds and give them protection and blessings, or, at the time of their death, to go to the Bardo to meet and bring them to Dewachen”